Posted by Sandra Masterson at 23:00 No comments:

Talking to the National Park’s ecologist about the poor state of the peat bogs and the uplands in general, the acid rains that came with the onslaught of the industrialisation of South Wales; air pollution and periods of overgrazing, a result of a past misguided agricultural policy, have all helped bring about the current state of affairs. We discussed the importance of the farming and grazing communities, their state of decline and the fragile balance between the activities of the farmers and the health of the hills.
This enmeshed conundrum continues, the human impact on the land and wider environment driven by human needs and concerns, and the slow but emphatic responses of the land and wider environment to these activities.

On Waun Figen Felen gorse and heather bails delivered to the peat bog, lay like bandages on the surface of this scared landscape. Unfurled they are used as a lint dressing that try to stem the flow of erosion leaking through the deep gullies, the slashed surface of the peat beds. 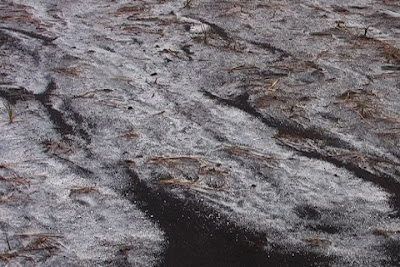 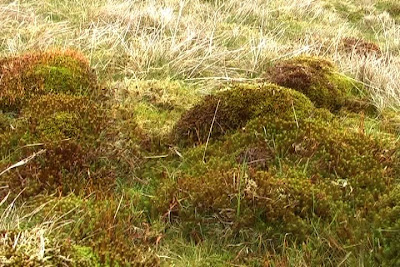 Trying to walk lightly over the land is difficult and is not what everyone is trying to do, but it might be something we all need to consider seriously.
Posted by Sandra Masterson at 22:29 No comments: 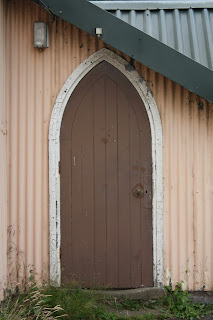 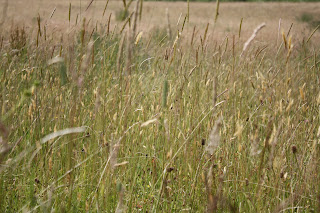 Posted by Sandra Masterson at 23:21 No comments: 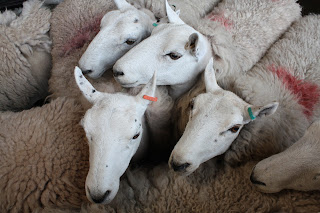 I think sheering sheep may be the reason the phrase "backbreaking work" came into being, Last week I filmed three men who worked for a whole morning dragging sheep from the pens,calmly turning them onto their backs to sheer them before moving onto the next. In a morning they sheered 300 animals, they had another 300 to do in the afternoon. This was their third day on the farm; they were paid approximately 70p per sheep. I was struck by the shear physical qualities of their work, in a time when it is quite rare to see such hard labour being carried out with such purpose. The dogs were also incredible, they managed to be with the sheep without causing panic or distress, but at the same time to keep the sheep moving in the right direction. The large barn was arranged so that the sheep were coming in from the field driven by one woman and her dog, two men got the sheep into a large pen before driving them into two smaller pens that served the sheep shearers. After sheering the sheep they were released back into the yard to be collected by the woman and her dog to return to the field. Two other women collected rolled and packed the fleeces into big canvas sacks. The barn was noisy but calm and the sheep did not seem at all distressed, but as they went from the sheerer to return to the flock they all gave a leap that seemed to be both of joy and relief.
Posted by Sandra Masterson at 19:34 No comments: