Scientific look at the landscape:

Waun Figen Felen (SN823178) contains a large expanse of exposed peat. There are different theories to explain how the erosion started. However none of these account for the way in which almost all the vegetation has been stripped or fatally damaged in a single event, such as fire, and then subsequently exacerbated by causes such as grazing, wind and rain erosion. A peat bog operates like a living organism. A healthy blanket bog has a symbiotic relationship with the rich and diverse flora and fauna that inhabit it and help to keep it operating efficiently. A healthy peat bog stores carbon.
In contrast a weak and sickly peat bog is not in balance and invasive species take up the space once occupied by the sphagnum moss, cotton grass and other rich and diverse species. Molinia is a golden grass that in some areas is so dominant; it now seems to give large areas of the hills their colour and texture. This grass is also a highly inflammable material. A peat bog on fire releases masses of carbon back into the atmosphere and so the damage is doubled. 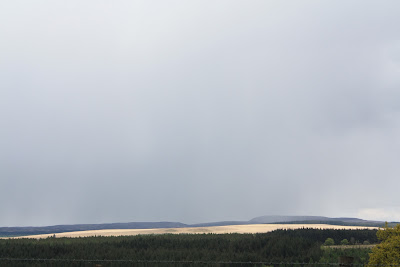 Posted by Sandra Masterson at 23:12